Did you know we also design & produce the highest quality signs for schools?

Get a Free Quote

What Our Customers Say

Fortunately after much research I found one of the countries top signage firms on my doorstep IMAGE SIGN STUDIO , all I can say that they have ticked all the boxes I require , great communication , quick to respond to questions about the project , deliver on time & always on time for meetings , professional , quality , good value , great craftsmanship , listen & advice , they definitely have a accurate sense of what a customer wants , working with them has been a refreshing change , I cannot recommend them high enough if carlsberg did Signage it would be just like the Work IMAGE do ...!

Just a note to say thanks for sending through these photos - we are all absolutely delighted with the signs now that they have all been erected around the building. They really look smashing! Many thanks to Image Sign Studio for all your hard work in installing them - they have been really excellent - and last Friday was absolutely perishing cold too - so for them to have worked the entire day in the freezing cold was a major feat in itself - and very much appreciated by all of us too! Many thanks

Image Sign Studio provided us an excellent service. They listened to our requirements, made a design that was modern, trendy, and functional. They came to place the sign at a time that was convenient to us, with professionalism and courtesy. We would whole-hearted lay recommend Image Sign Studios to anyone needing a sign.

I LOVE THEM!! Thanks to Rich and Dean at Image Sign Studio. With new branding we wanted shiny new signs and they have provided us with exactly what we had in our minds. Quick, slick and professional service.

We have worked with Richard and his team a couple of times to create some bespoke signage for inside the cinema in Chesterfield. The team have been able to create and distribute the signage very quickly and to a high standard each time. They are able to use brand fonts and styles exactly as specified and at a price that is competitive. We shall definitely be back to use Image Sign Studios again, including some external signage work in the near future.

I would like to say I pleased I have been with the service from the image sign studio. From the original phone call making enquiries to the end product and installation of the sign the service was excellent. Even though I changed my mind a couple of times with the design right up to the last minute nothing was too much trouble. The installation guys were efficient, polite and kept disruption to a minimum on the pavement outside my business. Will definitely recommend the company.

Highly professional company offering a reliable service with a great product on time and to budget. We wouldnt use anyone else!

We used Image Sign Sheffield for the first time this year and were so impressed with the level of attention and customer service given to us. The plaque was absolutely designed around our vision of it and no small adjustments or last minute requests were too much trouble. They are a very professional organisation and we would certainly use them again.

Richard and his team at Image Sign Studio deliver a very efficient and professional service. Their wealth of knowledge and expertise helped us to complete our various projects, such as poster printing and exterior signage to a very high standard. We will certainly use them again when the need arises.

The Fight to Save Devonshire Street is On, Report Shop Signs Sheffield 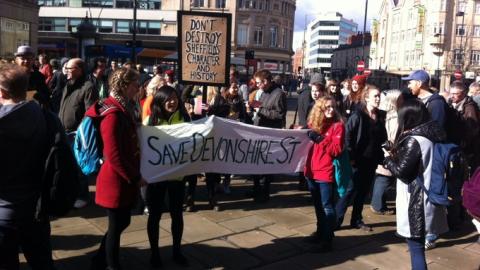 Only a few weeks ago, we reported on the latest plans to demolish shops on Devonshire Street in Sheffield. Campaigners have been fighting ever since to save them from being bulldozed, and have now raised £15,000 in order to launch a legal battle.

Objections to the Controversial Plans

There have been more than 20,000 objections to the controversial plans, also previously reported by experts in shop signs Sheffield Image Sign Studio. Sheffield Council plan to knock down the shops on Devonshire Street and replace them with shops, restaurants and flat.

The campaigners have been trying to raise the money needed for the legal costs for a judicial review to overturn the decision to knock the shops down. The money will cover the costs in case permission for a review of the case is refused, and has been raised through a variety of fundraising events and activities including an art auction, gigs, and online crowdfunding from those who support the campaigners.

The head of Save Devonshire Street Nick Roscoe said “The community has shown it is totally behind us and I think if there is any chance of holding the council to account then we have got to take it.” There has also been an organised protest outside Sheffield Town Hall, in which hundreds of people attended to protest against the scheme to convert the shops into flats and restaurants. Campaigners were out in force to make it known that they disagreed with the plans, saying that the shops on Devonshire Street are part of the city’s heritage.

According to Sheffield Council, they have been put in a difficult position regarding Devonshire Street and expressed clearly that their hands have been tied by government requirements. Sheffield City Councillor, Leigh Bramall, said: “Although technically we make the decision on planning applications, our hands are tied by the stringent planning laws set out by the government. If we did not follow these laws we would be putting the Council under a big risk of being taken to an appeal by the developer, to be heard by the National Planning Inspectorate, which would mean that the Council would be overruled and the development go ahead, but with the Council facing huge legal bills. What we need to see is the Council being given the powers to make the decisions to shape the future of our high streets, so we can make the decisions locally, listening to the views of local people rather than having to follow arbitrary rules made up by bureaucrats in Whitehall.”

According to the Sheffield Star, several celebrities have backed the cause, including Sheffield singer Jarvis Cocker. He called the second hand bookshop Rare and Racy, which has been on Devonshire Street since 1969, a ‘global treasure’.

When the review application has been submitted, a judge could decide the campaigners have a case based on the paperwork, or it could go to the High Court for a hearing in August. As professional makers of shop signs Sheffield, Image Sign Studio are very aware of the support for this eclectic group of shops and think it’s a shame not only that they may be destroyed, but sad that so many people are upset by the proceedings.

For help and advice on the manufacture and installation of your new shop sign Sheffield, get in touch with Image Sign Studio on 0114 261 7617 or email us at rich@imagesignstudio.com